Facts of the book of Esther
Prior to Esther being the queen, King Ahasuerus was married to Queen Vashti who was disobedient to the king. Because of her disobedience, she was removed. The king searched the land for another queen, and found Esther. The Bible said she was beautiful and obtained the favor of the king.

Preparation
Esther, a Jew, was prepared for the next steps in life. Although she may not have known she would be queen, the Bible gives us a glimpse that she kept herself together which only comes through preparation.

What are you asking from God today? Are you prepared?

The Plot
The king’s helper, Hamman, required everyone to bow down to him, but when Mordecai, Esther’s uncle, would not, he sought to destroy all the Jews in the land. Mordecai began to weep. When Esther found out about the plot and the sadness of her uncle, she sent her helper to find out what was wrong. He told her about the plot and advised her to not think her life would be spared because she was the queen. He stated, perhaps you have been made queen for such a time as this!

Prayer and Fasting
She ordered her maidens and people to fast three days with no food or water. She decided she would approach the king, which was forbidden. During this time, you can only go to the king if you were invited. But she declared that if she perish, she perish!

Purposeful
She was purposeful. Before making any big move she was wise enough to take her thoughts to God for direction. Are there some big decisions you have to make? This three-day fast is a great way to hear from God. God honors prayer and fasting and will give you a clear and concise answer of which direction to take.

The Choice is Yours! 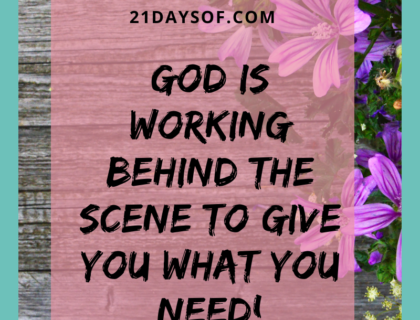 God knows what you need!

Let go what is killing you even if it kills you to let go!

I wrote about this on my blog the other day 😉

Sent from my iPad

Look to the LORD and his strength; seek his face always.
1 Chronicles 16:11

Kemberley has authored several books, contribute to many media outlets and educate many regarding personal finance.