Change your thoughts to positive!

There’s a story of a man who had a flat tire on his way home one night and realized that he didn’t have a jack in his car. It was very late but his only option was to borrow one from a neighbor. As he sat in his car, he worried that he may not get a good reaction from his neighbor after waking him up out of his sleep just for a jack. He thought about how his neighbor would be grouchy and even if he did get up he wouldn’t find the jack easy and would have to go through a lot of trouble to get it out of the garage and would just get even angrier at him. The thought of this happening made the man mad! He eventually  went to the neighbor’s house, knocked on the door and when the neighbor opened the door the man tells the neighbor, “You can keep your stupid jack if that’s the way you’re going to act!”

How often do you find your whole attitude is set in the wrong direction by imagining the worse that could happen? You have the entire scene played out in your head even before one event occurs. Consequently, you react based upon your negative thoughts. Philippians 4:8-9 says whatever is true, noble, right, pure, lovely, admirable, excellent or praiseworthy – think about these things! Remember your mind is a battlefield. Bring every thought into captivity to the obedience of Christ. No negative thoughts allowed

Even in the dark, God is there 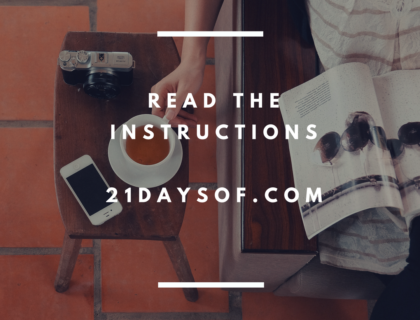 Time is your most precious gift!